OT: Lest we forget our origins

Off topic I know, but truly wonderful. 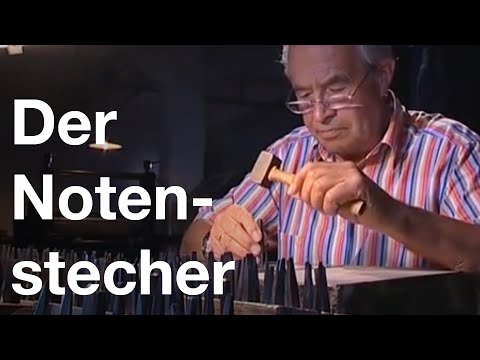 … and I’m forever grateful that I don’t have to do that!

Thank you so much for sharing this movie. Very interesting to see the old craftwork.
And yes, I’m very glad, that we have computers now.

Thanks very much for passing this along.

I played a concert in Wurzburg once, nice little town, didn’t know it had any kind of music businesses

The engraver’s last work was dedicated to Bach’s last unfinished fugue. That feels like a worthy conclusion. It is also pleasing that Hans Kühner did not retire afterwards, but worked his way into computer engraving (couldn’t recognize the program used).

It’s a pity that these beautiful old crafts are all dying out: press printing, calligraphy, handmade paper etc. But if the engraver says he needs about the same number of days for a 500-page Haydn score, one can understand that that no longer fits our time.

It’s a pity that these beautiful old crafts are all dying out: press printing, calligraphy, handmade paper etc.

Just as mainstream commercial business, plenty of crafts and artists use them, which is an appropriate place for the skills. My wife was taught engraving as an art major. Even music engraving of a form still has a place, you can still buy printed score paper. I have a bunch from a place in Hollywood. Chatted up the owner, he relayed how John Williams commissioned a special run of his favored sketch paper (it’s not cheap to get a custom run).

you can still buy printed score paper. I have a bunch from a place in Hollywood.

Is that Judy Green Music? I’m sure I still have scores on King Brand or Aztec (Associated Music) paper from late 90s NYC in boxes in the attic somewhere.

I’m sure a lot of people here have the out-of-print Ted Ross book, but it’s also available on CD from NPC Imaging.

I have a reprint of the Gamble “Music Engraving and Printing” (1923) but it is now up on Google Books for free, and has a lot of detail about the engraving process too for those who also like to geek out about this sort of thing.

Yes that’s it, home of the Magic Music Writing pencil

I used to order paper from Valle Music Reproduction in Hollywood. Super smoooooth when used with pen and ink and erased well. Glad those days are over.

Or to metal, which is even more irreversible!

That is totally brilliant. I could watch him work all day. Thanks!

hello “Doriconians”,
the notationsoftware is “Amadeus” from Hamann & Maas
You will find more info about AMADEUS IN WIKIPEDIA…
Kind regards from munich
Peter Kütt

I almost remember, but it has been too long. And I wonder what has happened with it since the 1980s. I find nothing about it in English Wikipedia, and not even a German article. There is no mention of it in Comparison of scorewriters. I found Kurt Maas, in German only. With much searching I managed to find an undated interview with Mike Mack Smith of Barnes Music Engraving. (Being a New Yorker, I had never heard of either.)

So do tell: Where can we find more info on the history of Amadeus?

Where can we find more info on the history of Amadeus?

I don’t know much about it either. If you missed it, @benwiggy did a great blog post on “A brief history of music notation on computers” last month that I found really fascinating, and he briefly mentions Amadeus.

I did a quick bit of JSTOR sleuthing and turned up the following, although there’s not really much info here:

Thanks, Fred! (And Juerg too – I saw your post briefly, with some info now corroborated by Fred’s.)

I recognize that wide-headed treble clef from Henle and Schott, and had long wondered where it came from.

sorry, its only in german…