I did a search for this topic, but I’ve only found some cursory, pre-release questions. (Hopefully I’m not repeating anything here!)
I’ve attached a picture of the piano pedal markings I’d like to use. I’m not seeing them anywhere in Dorico yet–and maybe I just don’t know where to look? Also, if I use pedal markings, will they come across in MIDI playback?

The last update did a lot for MIDI output, so hopefully more is to come. It’s almost made Dorico fully usable for me. 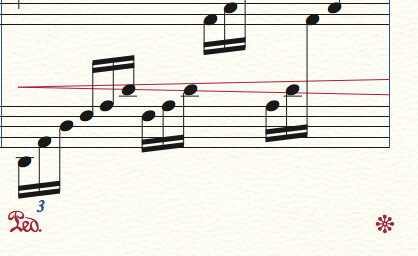 Dear coreyhead,
Just wait for some hours and you will get what you need !!! Lucky you

Don’t get his hopes up TOO high! It’s my understanding from the Development Diary that the piano pedal solutions are not in this month’s update, but in the one after that.

Yes, that is what I understood as well. Is there a date for this months update?

I remember having read that it could come by mid-february… It should be close !

Thanks for the blog post link. I hadn’t seen that one. And I’m glad to know I’m not just missing something that’s there. Hopefully it will be soon!

My main wish for pedal markings is that there will be some kind of intelligence built into it, suppressing the display of multiple pedal on and pedal off symbols. I use Kawai VPC-1 as my master keyboard, and it sends out not only one pedal on + one pedal off message when using the pedal, but continuous sustain pedal movements, resulting in a lot of pedal down + pedal up icons in Logic Pro. It’s good for half pedalling but not for notation.

The initial support for piano pedalling in the next update following 1.0.30 will not include MIDI input of piano pedalling, I’m afraid: you’ll have to input them via the Shift+P popover or the Playing Techniques panel.

Thanks for the info.
This image describes the common problem I described in the post above.

Can anyone do a quick step by step dummy’s guide to inputting piano pedal markings? I’ll admit to being new to this but nothing seems to works and it’s driving me insane.

The current version of Dorico really doesn’t support piano pedalling, I’m sorry to say. However, the imminent forthcoming update does include comprehensive support for pedal markings, and I hope you will be happy with the level of functionality we have built.

The current version of Dorico really doesn’t support piano pedalling, I’m sorry to say. However, the imminent forthcoming update does include comprehensive support for pedal markings, and I hope you will be happy with the level of functionality we have built.

Ooh! There’s one word I really like in that reply!

Well, the word “imminent” is probably misjudged. We had our bi-weekly planning meeting this morning and those pesky chord symbols are taking longer than planned to tie up, so the update it turns out is not all that imminent any more. But the delay will only be in the order of a few weeks, so we’re not that far off. Sorry for getting your hopes up!

I love the transparency, diplomacy and truthfulness of Daniel and Team Dorico! (Politicians take note…)

Hahaha! No issues here! Take as much time as needed. I should have added a winky face to my post anyway!

I will second what music maven has stated:

I love the transparency, diplomacy, and truthfulness of Daniel and Team Dorico!

I was really hoping for the update this week. But I’d rather hear that things are being fixed and will work correctly when implemented, than to receive a poorly working update.

Cheers to the Dorico Team for an outstanding effort!!!

Daniel and the rest of the team are a huge part of what made me decide to join the ranks of Dorico users.

I’m pumped that the chord symbol update is being cooked, and I hope repeat endings will follow shortly. I can wait a few weeks while I get cozy with the workings of what’s already here.

Do you have an ETA on the next Dorico update?