Should I Just Wait For Dorico 4?

Should I just wait a year and save fifty bucks? Why does Steinberg penalize early adopters in such a way?

And why is there no dedicated line/shape tool yet?!? In new music, this is an essential feature.

Guess I’ll check back in a year…

If you skipped the first upgrade from 1 to 2, then since Dorico 2 came out (June 2018?), you have not had access to the features that were available in version 2 (and they were numerous).

When the next update comes out, it will include a comprehensive list of what features it adds. Look at the list and decide whether to buy. I’m not sure why this continues to exasperate folks, as it is pretty clearly spelled out… and entirely voluntary.

…and people who upgraded to D2 got to use D2 features the whole time too.

Lines are coming; they’ve introduced a few new line-relate things although not free form lines proper. You can’t do everything at once.

If it’s not worth your money and you aren’t going to use it, don’t update. Problem solved.

If you’re going to do anything more traditional in the meantime, update and enjoy the new features you’ve paid for.

Have you realized how much has happened between version 2.0 and 2.2.20? We have been surprised by many essential features. Then came version 2.2.10 with the apparently tiny things like the F key for flipping items or the possibility to define keys for showing or hiding accidentals. Huge timesavers!

The version history of Dorico 3 makes clear how the condensing feature will be developed further. You can’t only use it for big scores, but also let’s say for choral reductions (with some workarounds like adding a bass clef to the tenor voice and transposing it down one octave, but as far as I remember this will be improved too).

I am also waiting for some features and improvements, but I think it’s absolutely clear that not everything can come at once.

For me personally it was absolutely worth spending the 99 bucks for version 2 and the same now for version 3. Sad about §49? Not at all. It’s well spent money, and from nothing, nothing will come.

Very simple: Check “Making notes” in the Dorico blog from time to time and decide what you can use and what is irrelevant to you.

Dorico is just a tool. If it doesn’t do what you want, don’t buy it. Everybody has a different set of non-negotiable “red lines” in their list of essential requirements.

If you can’t live without a dedicated shape / line tool, find a notation program that has one - and live with its other limitations. If you can buy it for less than $99 or $149, so much the better for you!

Those are some amazing screenshots too. Really makes me want to check out the software.

Yeah, it would be pretty difficult to make some of those scores in Dorico

I think one of those requires windows 3.1 to run… 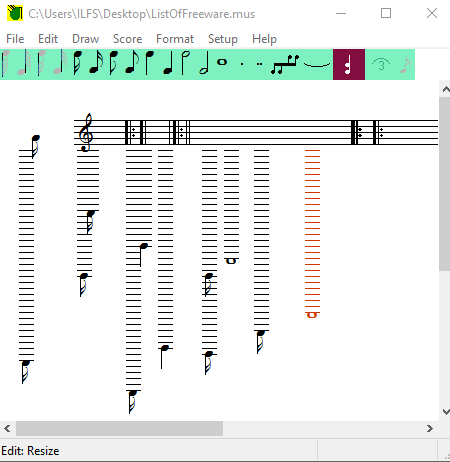 I’ve always wanted to write that. Now I know how.
Perfect for me sight-reading course.

Dorico 7 includes time-travel retroactive updates, so I’ve been using it for about a week. The mind control UI takes some getting used to, but I think I’ve gotten the hang of it.

The mind control UI takes some getting used to, but I think I’ve gotten the hang of it.

Does it write what you want rather than what you tell it to?

No, it comes up with ideas on its own and has your smart home lock you in the room until you agree.

Oh, if only you knew!
Dorico 7 was indeed the beginning of the end of the era of human composers. Dorico 8 started accepting composition gigs. Gotten rich, Dorico 9 bought Steinberg from Yamaha. Dorico 10 sacked the development team…

Oh, if only you knew!
Dorico 7 was indeed the beginning of the end of the era of human composers. Dorico 8 started accepting composition gigs. Gotten rich, Dorico 9 bought Steinberg from Yamaha. Dorico 10 sacked the development team…

If you can’t live without a dedicated shape / line tool, find a notation program that has one - and live with its other limitations. If you can buy it for less than $99 or $149, so much the better for you!

Any large US reseller will let Dorico users cross-grade to Finale for $119. The direct price is $149.
https://www.bhphotovideo.com/c/product/1440298-REG/makemusic_13_fht26edco_finale_v26_competitive_upgrade.html

Limitations in Finale? None that I know—downside is the steep learning curve as it tries to be all things to all users. 26 is pretty good. Despite the promised speed increase in Dorico 3, none that affects me vis a vis Finale. Tech support is ok. Posting on the Users Board is far less likely to generate negative comments from fanboys who think that Finale is the only app you need—unlike here.

Dorico does look better but that look can be emulated in Finale by spending some quality time in Preferences.
https://www.scoringnotes.com/tips/spaces-and-the-units-of-measurement-for-music-notation/

Anyone not getting the free subscription to Scoring Notes is really missing out. It doesn’t matter if your main app is Dorico, Finale or Sibelius — or even MuseScore.

Just so we’re clear, I have current licenses for 8 notation apps. I use the tools that get the job done. The only one that I’ve never done a project in is Dorico. Someday, maybe… if MusicXML implementation gets better, then sooner. I really do like the look but, as of now, every dollar I’ve spent is evaluation and it comes up short of my needs.

I’ve been working on a composition for humpback whales and low frequency rumbles of tsunamis and earthquakes. This looks perfect.

Wow! Encore, I haven’t used that in ages! I think the last time was in 1998 or so, when Sibelius came out for Windows. I was sure that it was kaput by now.

Do you actually still use that?? Is it still seeing updates?

I would recommend you to only purchase upgrade for version 2 / 4 / 6 / 8 / 10 … etc. for Dorico.
Similarly, for all other Steinberg Products, every two major updates.

This is optimized with balance between your budgets and your access to new features.

For fans with enthusiasms, or for those people who have vital necessary of immediately accessing certain function(s) available in the newest version, they purchase new updates ASAP. However, this shouldn’t be treated as compulsory action for all customers (whether individual or corporative). Especially, a company may have to do something to reduce their costs, hence similar decisions.

Let me make an example: Should Steinberg replaces mac computers used by their workers in their offices annually to the latest model? The answer is negative.

I’ve been working on a composition for humpback whales and low frequency rumbles of tsunamis and earthquakes. This looks perfect.

Not underestimating the perspicacity of humpback whales, they still might be thankful for using some octava lines and bass clefs