Hi guys,
I’m toying with the idea of building a new computer for music production, and I’m wondering what graphics cards are out there. Here’s my requirements:

So, what’s out there that you could recommend? Integrated graphics is no option (used it to great success in the past though!), since I’m leaning towards Ryzen 9 without graphics.

I recently asked myself that same question!
The most horsepower I found so far in a silent/passive gfx card is this one:

According to NVIDIA, this chip is plenty capable of driving a 4k monitor, but the spec of the card itself is quite useless! And I found only speculations on 4k on various forums…

Some other cards have active fans that completely halt when the workload is "light enough ". A nifty idea, but I don’t trust it to not switch back on at a bad moment! Murphey’s law…

Please keep us informed of your findings.

Hey Y-D!
I found this, looks promising for multi-monitor setups:

Apparently it’s some kind of reissue, but with 4xHDMI!
When it’s time, I might spring for this…

Food for thought…
What about no GPU card at all and using only a (good!) docking station?!?
At minimum something like the one I pasted below. (countless options out there!!)
You can then swap your entire station, incl. two 4k monitors, kbd+mouse, ilok dongles, and UR-C interface, etc. between your desktop rig and laptop(s)…
Lousy performances for gaming, but should be fine for DAW-like workloads.
Why not?.. 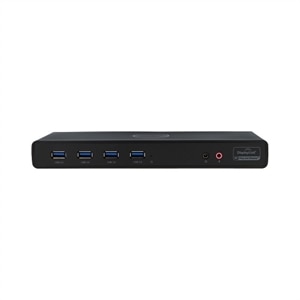 The VisionTek VT4000 USB Dual 4K Universal docking station allows you to easily connect your Windows, Mac OS or Chrome OS laptop to dual-4K displays and up to eleven accessories and peripherals through a single USB connection. This high-quality dock...

I’ve thought about that as well, but rather like the idea of a powerful production machine that can handle any type of VST load with low latency and multiple drives for docs, audio and samples. I’ve got a nice Intel EVO-spec Ultrabook at the moment with Thunderbolt 4, but unfortunately that is too weak for the things I’m usually doing…

I was thinking of using such a docking station with your main ‘desktop’ PC or workstation, not necessarily needs to be with a laptop.
You just need a USB-C port out of your new PC/workstation.
To quickly being able to swap your setup from your workstation to your laptop (or even iPad Pro!) is just icing on the cake.

Just an fyi - you should not expect an audio interface to work properly through a dock such as this one or any of the Dell Thunderbolt docks.

I built a new dedicated audio PC earlier this year and use this GT 710 card but I’m having all kinds of crash issues with a DLL file (separate thread).

I’ve just ordered the GT 1030 and I will give that a try, but for this crash issue that some experience with Nvidia it is recommended to use Nvidia Studio drivers instead of the Game Ready drivers, but Nvidia GT series don’t seem to have studio drives, they are only available for GTX and RTX series.

I can’t find any other fanless cards to try though so I will see if the GT 1030 fixes the issue, otherwise I might have to try AMD, but really want a fanless GPU solution.

Here is the dll issue thread graphics2d.dll crashes - #46 by simonslee

I noticed on the ASUS website there are multiple driver versions listed for the 710, it might be an idea to try one of those?

I have tried the latest from that site, Version 451.48, that still has the issue

Well, if you have the time and the patience

, you could work your way back towards the older versions… Sometimes that’s just the ticket, I managed to solve an issue with my soundcard that way.

Hi Steve!
why is that?

I used a NVIDIA Quadro RTX4000 for my new PC build last year. I can say that I’ve never heard the fan under load. It is a true workstation-grade graphics card, and because of that NVIDIA has a much stricter process for vetting driver releases than their Gforce line. It is a bit pricey (~$1,000 USD), but if you want something that just works, than this card is amazing. If you plan on using your PC for other creative endeavors (video editing, 3D modeling, etc.) than something like this card is what you want.

This was from my personal experience on a Dell WD19TB hub.

I have a wd19tb too, and just did a test plugin my SSL2+ directly on my computer and didn’t found a noticeable improvement, thou it might be there, that’s why I was asking. Have you tried connecting it to your dock with the new firmware that was released on November?
Best regards°

Yes, same problem. My UR44-C only produced intermittent sound. That was with my previous system, an HP laptop i7-8550u, pretty strong for a laptop. I had to plug the device into a USB port directly on the machine.

I have a Dell Precision with an RTX3000 and I was curious if you had to do any tweak to the control panel or you just leave it as default?
Regards!

I see, so it is a permanent thing, right? I guess I’m lucky then

Thanks for your answers!

Yup. I built my current system a couple weeks ago and will eventually sell that laptop.