Newbe question, here. I’m migrating from Sibelius Ultimate. I have a 3-movement piece, each of which ends with a Final barline. Had I written this piece in Dorico I would have added three flows. But now that it is exported from Sibelius and imported into Dorico using MusicXML (Dolet), the piece exists as a single flow.

In Sibelius you can select a final barline, and change it into a section break. But I cannot find a similar way of “chopping” up a single flow in Dorico at the three final barlines and making multiple flows out of it.

Conversely, if I split things up in Sibelius and import the movements as 3 separate files, how can I then re-integrate them as individual flows within a single piece?

Gilles, you can split a flow.

You can split flows at specific rhythmic positions. Flows in Dorico Pro are independent of each other, meaning they can contain different players, have different time signatures and key signatures, and have different options for notations, including...

Frantastic! Works perfectly.
Thank you so much.
G

That’s good to hear it worked for you

Actually, everything worked fine until the split from flow 4 to flow 5: there, it lost the solo clarinet! Watching it play, in “Play” mode, as soon as the playhead crosses into flow 5, the solo clarinet disappears from the mixer and becomes silent – although it is still there in the score, in the track overview as well as in the Lower zone (Key Editor panel)!

However (and maybe you can explain) in all other flows there is an additional “track” under Clarinet, with a quarter node + “1” symbol in its track header. And when I select that additional track, there is information in the track inspector. Well, that extra track is what disappears as soon as the music crosses into flow 5.

I exported several other multi-movement Sibelius pieces using the Dolet 8 MusicXML plugin and in all cases there is an instrument or two that randomly disappears/stops playing after a “write → Split flow” command.

To verify, I created a short, multi-section piece in Dorico and inserted a “write → Split flow” on each fnal barline: no problem at all. And it played right through to the end. However I notice that the clarinet no longer has that extra clarinet track underneath, with the strange header. Can you tell me what it is (see attached image), what it means, should it be there in the piece that fails?

P.S. for the time being, I solved THE problem by splitting the movements at the source - meaning, inside Sibelius and before XML export (using plugin “Split Score into Movements”). 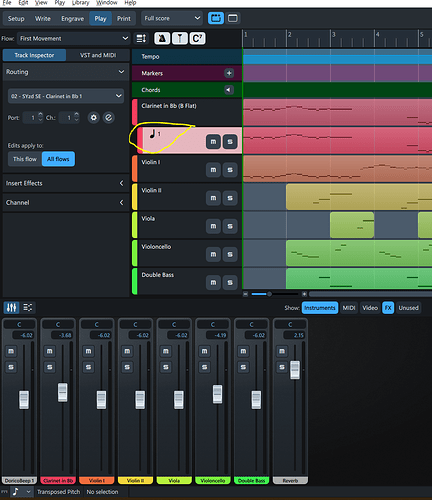 Tks, that did it. I thought the option enabled multiple articulations on the same instrument, but actually it would be more applicable to concurrent voices like divisi strings.