Hi,
I’ve got the following problem: I have a trumpet in Bb and sometimes the stem direction of a middle b is facing upwards (see attachement). I’ve started the the score in Dorico and “remove forced stem” won’t help (… because I didn’t force the stem up).
If I force the stem down, the eights notes on the first beat will also change the stem directions. Strange behaviour!
Any suggestions?

Sorry, I should have searched a bit longer.
I found out, that this behaviour is forced by the “contextual stem direction”. Found the chapter in “Behind Bars” as well: “Notes on center stave-line” (p. 13).
Elaine Gould also states: “Some editions use down stems exclusively”. Therefore I would like to ask, if it would be possible to add an option, to switch the “contextual stem direction” of.

Hmh, doesn’t look like everything is behaving like it should be - see snippet.
This came up, after I alt-copied a passage from antoher voice and than entered the notes using “lock duration”.
As in the other cases, I tried all possible kinds of resets, but it didn’t change anything.

Could you attach the project in which you’re having this problem, so I can take a look at the file?

I’ve send you a mail with the file.

I had the same problem with Alto Sax when I put in some notes writing totally new in write mode. I did not change any presettings and did not experiment with them since this should not be necessary in this simple example:

I’m used to seeing middle line note stems almost always downwards. Only in rare occasions would I force them upwards and I’ve noticed that Dorico does this a lot more than I (or a lot of printed editions) would, even considering the context. It would be nice if we could override this globally.

Wolfram, Dorico is (I think) unique among scoring software in that it follows the conventions that pre-date computer engraving concerning the direction of stems on the middle line of the staff, which is to say that it is contextual, i.e. it can point either up or down depending on the stem directions of the surrounding notes.

We could potentially add an option to disable contextual stem directions if you would like to prevent Dorico from doing this, but it’s not something we are currently planning.

yes, please give us an option to turn this behavior off.
I always use stem down for middle-line placement.

I like contextual stem directions generally. But to my eye in this example the midline stem-up isn’t necessary since the notes aren’t beamed or slurred together. It doesn’t clarify anything; and since people are so used to midline stem-down it can actually be distracting. If you do offer an option someday, my preference would be to use context only where the midline note is connected with a beam &/or slur.

The concept of contextual stem directions is clear to me, yet I never encountered middle line notes stemmed up when not beamed or slurred (even only slurred I wonder if I ever encountered them). And as a former professional conductor, aged 50, (in education now) I studied myriads of scores, certainly dozens engraved in times of pre-date computer engraving. It just looks plain wrong for me, sorry… Perhaps it is different in anglo-saxon countries (not with Eulenburg and Novello, I think), but german engraving is kind of strict in this regard (Schott, Bärenreiter, Breitkopf, Universal Edition…)

Edit: I just researched a bit since this is something so basic I would have gone sleepless about tonight

Ok, I am quite sure Elaine Gould (I love her book!) is wrong here… On page 13 she gives an example with a b stemmed up and the next example shows the passage with b stemmed down, commenting: “and not”.
Yet here is a quick example which should look different if she is right (Universal Edition, 1968, Haydn Sinfonia Nr. 99, III. Movement). Look at the 2nd violin, bar 63. 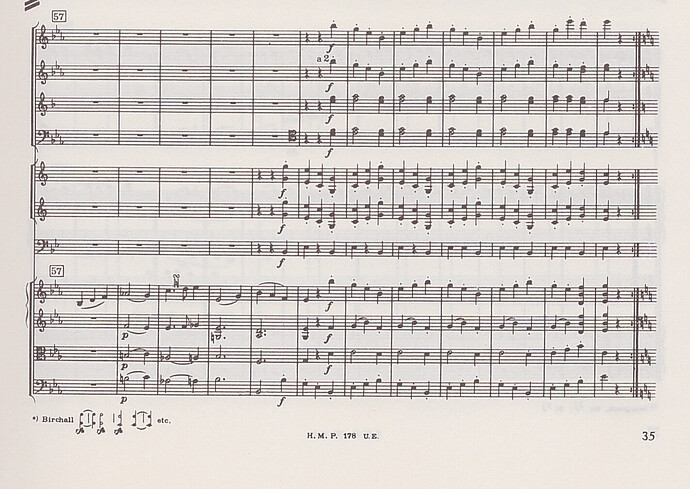 Haydn_99_III_UE.jpg1422×1009 406 KB
I am sure I can find thousands of examples with a b not stemmed up, but down in similar contexts, yet not fifty examples of a b stemmed up (I wonder if it would be ten examples, proper search assumed). There is even a slur involved which would imply upstemming!

Please, Daniel, imply this rather soon than later. Thanks!

wolframd, I feel like you. On the first sight, this just looks wrong to me. I just was going randomly through some orchestral parts from the romantic area in ISMLP and found lot’s of contextual stem directions in the parts also from German publishers. One example from Bretkopf & Härtel:
http://imslp.nl/imglnks/usimg/3/3f/IMSLP36162-PMLP25688-Schubert-Sym5.Oboe.pdf
I’ve entered some bars from the first movement, to see what Dorico is doing in these cases (see attached score).
I entered the correct bar numbers, so you can easily find the bars in the part.
A) In bar 77 Dorico uses a different stem direction. The engraver at Breitkopf uses a downstem probably to change the slur position
Very interessting are examples B and C! The engraver used a different stem direction for the b flats in the identical bars 99 and 107! This also changes the slur position. Probably depending on the following bars.
In the last example the engraver at Breitkopf didn’t use an upstem note. Again probably because of the slur position.

I agree, the possibility to have notes on the middle line stem down by default should exist, since that is the most common practice by far. I’m a singer, chorist, and music teacher, and the times I’ve encountered middle line notes with their stems up in professional music are very rare.

Thank you for your post, Heiko. I worked with Sibelius when it used to stem middle line notes up occasionally…

Of course we need contextual stem direction generally, and it should not be switchable in general since it is the totally right approach (depending on slur directions and beaming).
Your Oboe part example is a very old engraving example (probably 19th century or early 20th), and in this time the engravers were - here Daniel is right - not so concerned about stemming the middle line notes (please forgive me if I write “b” from now on, since this is much faster, albeit often wrong

).
Yet since the middle of the 20th century - in times before computer engraving was common - I think nearly all engravers most if not all of the time stemmed b downwards. Please correct me if I am wrong here, though.

I never take something for granted, even if it is the highest professional standard (like Elaine Goulds book). Probably as a good conductor you have to have this kind of charakter (yet I made no big career and am teaching now

Heiko, you have a forced stem direction on the up-stem note three bars before the end of the piece. Go to Engrave mode, make a marquee selection around those notes, and choose Edit > Stem > Remove Forced Stem; doing this in Engrave mode ensures that Dorico removes the override at every rhythmic offset.

Thanks, Daniel. That works. I was trying to remove forced stem directions in Write mode, where the option is available too. This is a bit misleading …

Remove Forced Stems works in Write mode, but only when there is not a forced stem direction at a specific offset through a tied note.

While I agree that it might be nice to have an ability to switch contextual stem direction off, I wonder at what cost.

As musicians, we have had a lot of music thrown in our faces. And the last 20-30 years a lot has been done by computer engraving, which has introduced (for lack of a better word) poor engraving (default rules, program limitations, user limitations, etc.). I just wonder if the B stem up looks so weird, because we haven’t seen it often enough.

I remember watching a Youtube video of Daniel talking about Dorico (the MOLA video) and he made a really good point… Computer engraving has had an enormous effect on what musicians read from in the last 20-30 years.

With that said, I was always taught the B line stem could go up or down, and it only really mattered when beaming occurred. And then there were conventions to handle those situations. So it makes me wonder, if Dorico did not provide a means to turn this off and musicians began to see stems up on the middle line, and engravers got used to seeing it, would we think it looks weird in 20 years when we saw the stems down? Especially when the context of the music might indicate that the stem should be up?

Just thinking out loud (or through text)…

Certainly if it is a matter of what the Dorico Team fixes/adds first, I don’t see this as a crucial need even if it would be nice to have down the road.

It depends on the repertoire you’re used to reading. Most of the repertoire I play wasn’t written in the last 20-30 years so I’'m used to seeing the b-stem pointing downwards. Even a lot of the older music which has been re-engraved recently still does it that way. I’m sure that a lot of seasoned musicians will be slightly distracted upon seeing an upward-pointing b-stem and when you’re reading music, you don’t need those kinds of distractions. I know this isn’t as crucial as a lot of other developments, but it would be important to have a preference setting for this.