The serious problem notification without any visible issue and crashes

Why this nonsense is happening? I see this error every other time without any crash. Everything works fine, but I can’t save my project under the same name, as it always does iteration saves without asking me. And I press cancel all the time for not seeing it anymore, but it persistently tries to save me nevertheless! Who has developed it in such way? 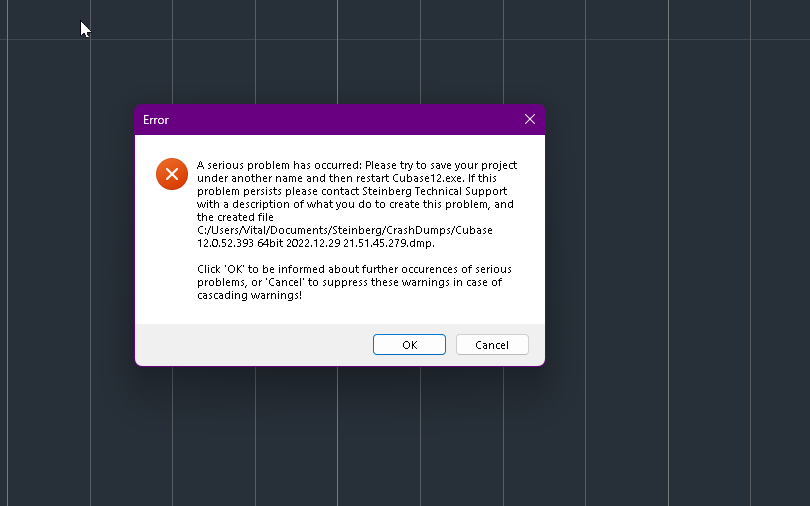 It has happened like 50 times already today, it’s very annoying!

I can’t save my project under the same name, as it always does iteration saves without asking me.

It says to save using another name, not the same name.

Why this nonsense is happening?

Who has developed it in such way?

The people who want you to know when a program has malfunctioned, to eventually help to fix it.

As for this crash, it appears that the Impact LX Mini remote control dynamic link library is causing this crash.

Maybe you can test this by removing this file temporarily:
C:\Program Files\Common Files\Steinberg\Shared Components\ImpactLXMiniSteinbergDAWControl64.dll and run Cubase. Does the crash happen.

Thank you very much for checking the dump, let me try to move that file.

It is crashing though. It doesn’t bring down Cubase, is all.

Yes, it seems it’s Impact LX Mini integration. The issue is gone after removing that file. Will report it to Nektar.

Thank you for the help, Steve.

This time the error happened, when I was creating a new group buss.

This one doesn’t have any useful info – it’s a different crash.

Also can you please simply paste the file into your reply (if there’s a) next time?

I’m simply using WinDbg Preview to look at basic info supplied by the crash file. You can download it and use it too… save yourself a little time, and maybe learn some useful computer stuff.

I thought you are using some proprietary Steinberg software. I will check WinDbg Preview, thanks.

For anybody interested the Nektar support has helped to find the issue. The silent crashes were because I had few tracks with duplicate names. It also explains why I had the error, when I created the new buss, so I’m quite sure it’s more Cubase problem than Nektar’s. I think it would be better to forbid the duplicate names creation in Cubase at all like in most other software, if it can’t handle it properly.

Tracks with duplicate names do not crash Cubase, and also the two crashes you had were different.

This can be tested:

While Cubase has duplicate track names

The second crash is defintely about the duplicate names, as it happened when I created the new buss, and duplucite names were for folder names and busses. Nektar keybord were not connected as a controller at that moment. Now I’ve given unique names to all tracks, folders and busses and there are zero issues and everything is working like it should including Nektar controller, so to me it looks like it’s about some bug in Cubase connected to duplicate names within the project. I’m not saying it’s a problem for all users, but with my gear and setup it is for sure.

Bug testing uses the scientific method. While you have found a workaround, this hasn’t been tested like this to ascertain the root problem.

Sorry, I don’t have time for it. It’s working now, that’s all I need. I can share the problem project, if you wish, and you can test as much as you want.

Of course - this is not your job, and you have things working. I mainly posted that info to help people to set their expectations in case they have the same problem.