I ran into issues of late with Cubase 12 Pro 12.050. It plays fine now, although was experiencing crackles/ pops last week, but a bit of tinkering fixed that, by oing through all my 3rd party plugins/ folders, and updating to 64 bit VST3. Now having problems doing an audio export, which needs to be done in real time, due to using external hardware units via AD/DA converter. Now getting a ‘time out error on real time export’. I tried reverting back to Cubase 12 Pro 12.030, and still the same issue. Tried adjusting ASIO Gaurd settings, sample rate settings, Buffer to >2000. I’m on an old Mac Pro 5.1 12 Core, 3.36 ghz, with 96 gb of ram, running OSX 10.14.6 Mojave. I’ll try turning Hyperthreading back on tomorrow, as it was disabled due to Zombie Intel Worm threat. Also having issues turning off/ deactivating a certain plugin. Time to buy a new computer I think.

While exporting a mixdown a pop up said “Sorry, timed out” then CB crashed? Cubase

Hello, While trying to export a mixdown in Cubase 11, my mixdown would not complete. It stopped in the middle of the process and a pop-up appeared that said “sorry timed out.” This section is where I have TGuitar strumming a pattern. Cubase would not let me mixeddown the normal way so I tried doing it in real time and the same thing happens. Cubase crashes and I have to restart it again. Does anybody know why this is happening? Is there some type of conflict with the fact that the TGuitar is pe…

I’m not using Chord Track. I’ll attach some screenshots to show what’s going on. At this particular point in time, I’m guessing the issue seems to be plugin related, as if I start the project using the ‘no 3rd party plugins enabled’ option during project startup, the ‘Cubase’ % CPU / idle wake up numbers drop to normal low levels when using the Activity Monitor in Mac. Presently, It’s the idle wake ups numbers that are maxed out at 2000-4000 (top of the ladder), and idle CPU % (down the bottom left of the ladder) at 79%. The ‘actual’ CPU System usage is 4-5%. If you guys are getting similar figures in your activity monitor, with everything exporting fine in real time, pleae let us know! After updating all the actual used plugins I’m not exactly sure what the idle % actually indicates? Maybe it’s just a CPU instruction that’s ‘looping out’, like a plugin trying to find a component in a folder that’s not in the right place? I’ve noticed a slight improvement in the Activity Monitor Cubase CPU % numbers (top left of Activity Monitor ladder) numbers (CPU Idle wake) when I updated all the used plugins from VST 2.4 to VST 3, which achieved an improvement of 270% down to 160% Cubase % CPU (Top left of Activity Monitor Ladder) BUT…As you’ll see by comparing the 2 screenshots, (before and after converting from used VST 2.4 to VST 3 plugins) the idle % at the bottom gets WORSE from 70% up to 79%. To compound the problem, the AVID EU Control app, that I use to control CUBASE on my Ipad, is also creating high idle wake up numbers in the activity monitor. I haven’t tried enabling Hyperthreading on the Mac Pro 5.1 as yet. 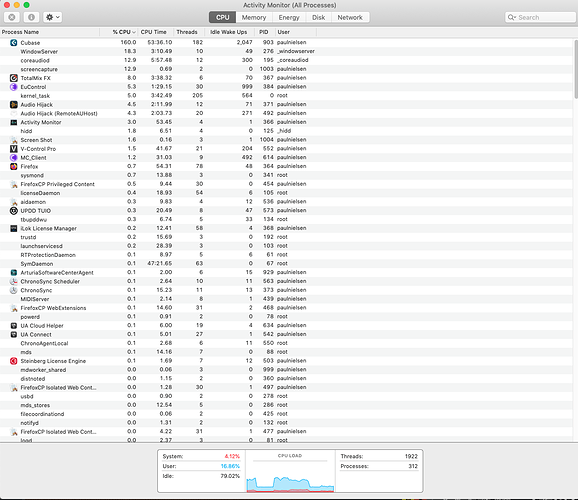 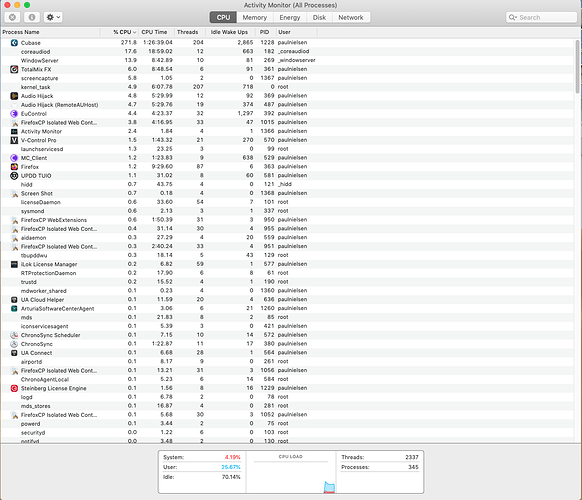 O.K. what I did worked!! Solution! I can now export a Drum Stem in Real Time without an error message… for now. I’ll try it combined with other tracks later. The CPU seems to be working pretty hard though. Also tried it with Avid EU Control on, with the Stereo Bus Compressor/ Limiter Plugins activated. So basically I changed out any instantiated plugin that was VST 2.4, and made sure I was using a VST 3 version, when I looked up the ‘instances’ table in Studio/ VST Plugin Manager/ VST Effects. Unfortunately Cubase 12, doesn’t let you copy the settings from a VST 2.4 version to VST 3 version, so you need to ‘manually’ compare and then copy the previous VST 2.4 settings across to the VST 3 plugin. The other thing I did was turn every plugin off, then one at a time activate each plugin, keeping an eye on the Cubase CPU % on the top of the Activity Monitor. The plugin that had the most % increase, was adjusted to be less CPU intensive. What I used to do in Logic x, when this sort of thing happened, was make sure that i didn’t have too many plugins in series on one channel strip. If you have 6 CPU intensive plugins in series, you split them and put 3 on one, and 3 on another using auxes. This helps with load balancing on the CPU.