It’s not clear for me when reading the Dorico 4 version history document, whether we can finally write an alternate chord sequence in parentheses above the main chord sequence like so:

but that only covers the parentheses aspect, not the placement above the main chord changes.

This has been very common practice in jazz real books for decades, so I’m really hoping it’s supported now.

Ah we’ll still have to wait then

Since the new parentheses feature is already a step in that direction, maybe it’s being considered for the next update @dspreadbury?

It’s not something that’s likely to be implemented imminently, but we know there is still a need for this, certainly.

parenthesized chord symbol is a little step forward, but a second line would be a great one, as I wrote many montgs ago
anyway thanks for the upgrade, the 2 hands piano recording transcription is really good! (OT)

I’m happy to find new features in D4 for creating professional leadsheets like the option to write clefs and key signatures on first stave only and parenthesis for chords! But it’s a bit disappointing that there is still no way to have alternative chord symbols in a second (or even third) line as many of us had expected. This is so common – Fakebooks are full of these alternate chords and I really need to write professional leadsheets with minimum two chord lines. Is this really so difficult to implement? For lyrics there are several lyric lines, why can’t that be easily be done for chords in the same way? Is there any workaround for the mean time?

All the developers just cringed. It’s deceptive how much work actually goes into implementing a new feature.

It can be done with little tweaks!

Hi NorFonts,
that is exactly what I need. Could you just add a short tutorial? And is the chord font the Petaluma font of Dorico? For me it looks different (better) than the results I get out of Dorico. Thank you,
Philip from Berlin

The music font is my last handwritten music font (still under-developement ), a redrawing by hand of SherMusic notation style.

The Title/Subtitle/Composer text fonts are also mine (still under-developement ), except the chords in between parenthesis which are “Pori Chords” font, the left ( and the right ) are Petaluma Script.

You can then space the upper chords using the spacebar then you can move up the whole chords text line via Engrave mode. 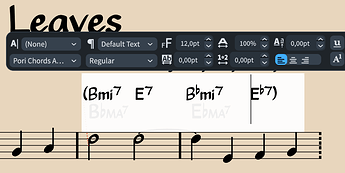 Is there any workaround for the mean time?

Thanks NorFonts! Is there a way to use the Pori Chord font as regular chord font in Dorico? I bought the Pori Chords ASC for Sibelius and chords there come really close to the Sher NewRealBook. But I prefer the possibilities and workflow of Dorico, so I 'm really looking forward to use Pori Chords ASC font (ore something similar) for leadsheets in Dorico 4. Will the font you are still developing fill this gap (and if yes: when)?

The trick for a second line chord symbols, is to use maybe Pori Chords, InkPen2 Chords, Opus Chords fonts, so the ones that work for Sibelius.

As I said above, you will need to set another text font for your left and right parenthesis.

Whereas for the SherMusic looking font I’m currently developing, it might fill that gap, but lets hope that Dorico Team will take in consideration making a second line chord symbols for lead-sheets.

It’s deceptive how much work actually goes into implementing a new feature.

I can understand that (I’m a developer myself) but one could argue whether other features such as guessing the chords from the selected notes were more important than this one. Professional musicians won’t use this very much since they know what chord it is and it will often be faster (and more accurate) to just enter manually. I’m not even a professional musician and I’ll never use that. The ability to invert pitches is another one, I can’t imagine that was requested more often.

The difficulty is probably not just technical, but also deciding on a functional level how every feature related to chords (selection, navigation, layout, …) should handle multiple chord lines.

In addition, sometimes a feature takes on what seems to be an inflated priority because it is a stepping stone to a more important feature that builds on it in some way we do not at first see.

Any update on this topic? Are the Dorico developers thinking about to implement a second alternate chord line in the near future? I’m overall very happy with switching from Sibelius to Dorico, but for all Jazz musicians here writing leadsheets with alternate chord lines would be essential. The given workarounds produce something wich you may use for rehearsals but not for publishing. Especially because I use the new PetaChords font from Scoring Express for Dorico it would be great to use exactly the same fonts and settings for a second line of chord symbols. Please!! This feature not that eccentric, realbooks are full of second lines with alternate chord changes…

At the moment, I’m afraid there’s no update on this. An additional complexity since this was last discussed is that Dorico can now show a separate row of chord symbols for a capo, if present, so we may now be getting into the realms of four lines of chord symbols.

Could it be a solution that the row of chords could either be used for capo chords or for a second line of manual written chords? I never write sheets for guitar and won’t need the capo feature, but second chord lines in jazz are as common as second lyric lines

I think nobody would need four lines, as reharmonized chord lines are normally not shown with capo chords for guitar…