I have none of the steps available that you use to locate your file: if I start with library, I can’t proceed to “Application” then “Support” them Steinberg then Dorico n. I have none of these steps displayed.

Are you sure you have your User Library?
In the Finder menu, click on Go (a drop-down list appears) , hold it and press the Option (alt.) key and Library will appear in the list of Options.
That’s the one you need to open.

Andy, in Finder I don’t have a Go command. I just have Preferences, which has nothing to do with a library, and other small things that are not relevant. When I tried to load your file, I used "File/Import. I think that’s the only choice I have

This is where the Go menu is located.

With a Finder window in focus, type Shift-Command-G. In the pop-up that appears, paste the following:

Be sure to include the tilde ~ at the start of the copied and pasted text. That means “my user’s folder”.

God, I feel like a little kid being led step by step into a dark wood I’ve never before ventured into…
When I go through the GO dropdown menu with the alt key down, no option of ‘Library’ appears The only likely related folder is one labelled Steinberg. When I opened it, this is what I got (see screenshot attached)
Gulp! 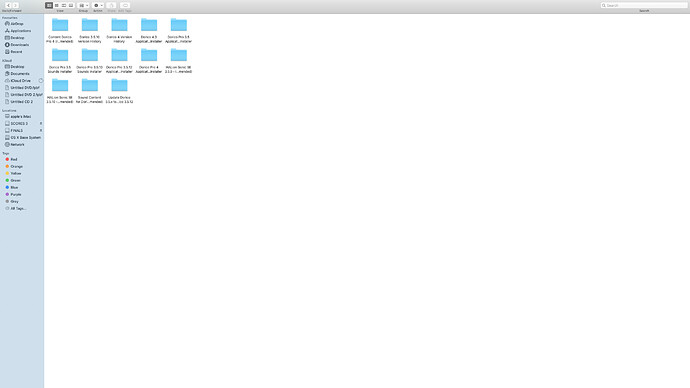 Try what Daniel said - it will take you directly to the Dorico 4 folder within the Library folder in your User folder.

With a Finder window in focus, type Shift-Command-G. In the pop-up that appears, paste the following:

Be sure to include the tilde ~ at the start of the copied and pasted text. That means “my user’s folder”.

I’m not sure what you mean by "wiith a finder window in focus. I can’t hold a window open and, at the same time hold shift-cmnd-G. So I had finder in the task bar, held the keys and pasted the instruction in the pop-up…and nothing happened.
Thanks

@andyforrest
I’ve had a phone conversation with John (leestreetstudios) and managed to get the userlibrary.xml file into the correct location.
Because cloud storage was involved, the Finder’s Go menu did not work as expected in locating the Dorico 4 folder. Neither did showing hidden files and navigating through the Users/Library folder. The way that worked was using Finder’s Go to Folder… command (shift-command-G) and entering the pathway Daniel Spreadbury gave ( ~/Library/Application Support/Steinberg/Dorico 4). Once the correct location had been found, moving your userlibrary.xml file into position was simple.
John will probably post in this thread if he needs any more assistance with what he was trying to do originally regarding guitar fret numbers, etc.

It was very good of Steven to spend so much time with me this morning in orer to check if your file had loaded in the correct place (it hadn’t as he explained. So now I tried again, using your procedure: still no luck: I get C and a continuation line, but bo roman numeral (V in my example.
This is how I proceeded:
I selected full barre C15 as a playing technique, then the plus sign
Then with the pencil tool I created a text of CV then OK
I’m a bit confused about the next instruction “Put C5 in the popover text”; re "popover: are you talking about the screen display I have on the Edit playing technique, or an actual popover on the score? With either case I can’t enter anything into the playing technique scree, and with the popover in the score, I just get “C” with a continuation line.

After selecting the C15 (it doesn’t have to be C15 - any one of those C with a number will do),
select the white plus sign - that means all the other characteristics of the C15 are carried through.
c5 should be put in the place where, on the screen display from 24 November it says Popover Text.
This will still say c15 from the technique on which you based the new one.
Once you’ve set this as the default by clicking on the star, it should work in write mode (fingers crossed!) bu entering c5 in the score popover.
Oh - and thanks very much to Daniel and Steven for sorting out the file location.

Hi, Andy;
In answer to your November 24 question “Does your window look like this?”, the answer is Yes, except for the V, which is always missing. Where does that “V” come from? I want it, but I can’t get it! I just get the plain old C every time! I used C5 for an example, and when I used the pencil to enter text, I wrote “CV”
But the “V” doesn’t appear.
I followed your sequence from this morning…same result.

The results get stranger and more and more selective. Steven Jones suspected that trouble was being caused because icloud was involved. So does Andy. Now, if I go through some of the many barre options on my library list, I someimes get success, sometimes failure. with c5. I get “nat.” on the score

with CV, I just get C, as I did before

Daniel, do you have any ideas on what is happening here? Could something be happening with icloud?

I’ve not been following this thread closely, I’m afraid. Have you moved your user home folder into iCloud or something? Otherwise I’m not sure how iCloud could have any impact on how Dorico finds things from the userlibrary.xml file.

Daniel, depending on what fret number I select in the library list, I get different results: For example, if I select c5. I get nat. on the score. I get the same result with c6 and c7. If I use a capital C and a roman numeral, such as CV, I jst get C on the score, and no V.

with CV, I just get C, as I did before

But with C10, I get CX on the score- the roman numeral! Finally!

Same results for c11, c12, c13. etc, or if I enter CXI, CXII, etc
I think both Andy and Steven Jones were implyingg that icloud was interfering in some way. Meanwhile, I went back to your original file and tried to install it in Dorico 4/userlibrary.xml and I got the warning “canot load file: invalid format” So I must currently be using And’s xml file

I’m not quite able to follow the steps you’re describing here. When you say:

what exactly are you doing? Are you trying to type something into a popover, or choose something in a dialog, or what?

Hi, Daniel;
I’m trying to display barre and half-barre notations in my score, which are conventionally displayed as a C (full barre) or 1/2C (half barre), followed by the fret number in Roman numerals. For example, a full barre on the fifth fret would be notated
CV
a half-barre on the 12th fret:
1/2CXII
The method for duration of the barre works OK, but I get all these different and wrong displays depending on which barre in the list I happen to choose. I’ve tried deleting most of the list, but it doesn’'t improve things