This might be a silly question, but does anyone have suggestions for custom keyboard commands with dorico? Everytime I go to enter in a custom key command it seems it is already taken by an existing default command, and I’d like to avoid conflicts with those. Maybe I’m just not getting creative enough??

Sorry, I thought that was the point of a forum like this… Apparently there is such a thing as a dumb question

I searched for other posts on this topic, but didn’t find anything directly related. The only reason I posted is because I spent 10-15 minutes entering different combinations of keys for custom key commands, but nearly everything I tried was already taken (or triggered some other function on my computer). I thought there has got to be a better way of creating custom commands that people use and I haven’t thought of. This is my first time creating custom key commands in dorico or any other program for that matter.

Because I use a MIDI keyboard, all of my note letter names are free. I use A for transpose, B for beam, C for cut beams, D for show hub, E for remove rests, F stays for flip, G is show voice colors, H is hide voice colors.
Control Z is show/hide signposts, control S is save as new version. Control option M and N are copy to Lower and higher staff respectively.
I have a bunch of jump bar aliases for filters and change voices.

Sorry, I thought that was the point of a forum like this… Apparently there is such a thing as a dumb question

I’m sorry - I was just making a joke about shortcuts!

I run into that problem occasionally, and what tends to help is asking myself the question: “How often do I use that particular functionality?”

This approach has frequently allowed me to happily discard default key commands.

I have set up a lot of key commands.
Cmd-Shift- F, x is my Filter command, where x can be D for dynamics, N for Notes, P for playing techniques. This cascading of shortcuts makes it really easy to stay within the shortcut logic of Dorico. I have a similar system for Noteheads. The „copy to staff above/below“ shortcut mentioned above is also incredibly useful to me.
Although, with the jump bar and aliases, there is an ever greater deal of flexibility, and I now tend towards only setting key commands for functions that a) I use frequently enough, b) are not accessible viable jump bar.
For example I have set „group dynamics“ to the alias dg (Dynamics, Group), so it’s as easy as typing jdg enter

md-Shift- F, x is my Filter command, where x can be D for dynamics, N for Notes, P for playing techniques. This cascading of shortcuts makes it really easy to stay within the shortcut logic of Dorico.

All good, I definitely should have caught that! (the joys of not being able to read tone!)

Thank you for all the replies! This definitely helps. I also found this while searching around: AK-100-xW-B/24, programmierbarer Nummernblock / Kassentastatur mit 24 Tasten, kabelgebunden
Probably way overkill for me at the moment, but maybe someday…

Related to keyboards, are you aware of Elgato Streamdeck?

I’ve been looking for a macro keypad, and I’ve found it. It’s an Elgato Stream Deck. (thanks to Dewdman for the recommendation!) [image] Here’s a really simple, 10-second video (https://www.youtube.com/watch?v=ff2HVHGQ5uA) so you can see the interface I set up. As you can see, the option for folders is pretty snappy. I’m sure it’ll evolve as I acclimate to using it my workflow, but it’s so simple to change. You can even load and save profiles. I made the icons myself in paint.NET. It’s easy t…

There are different models (related to the number of buttons) And you can purchase a comprehensive button set for Dorico: 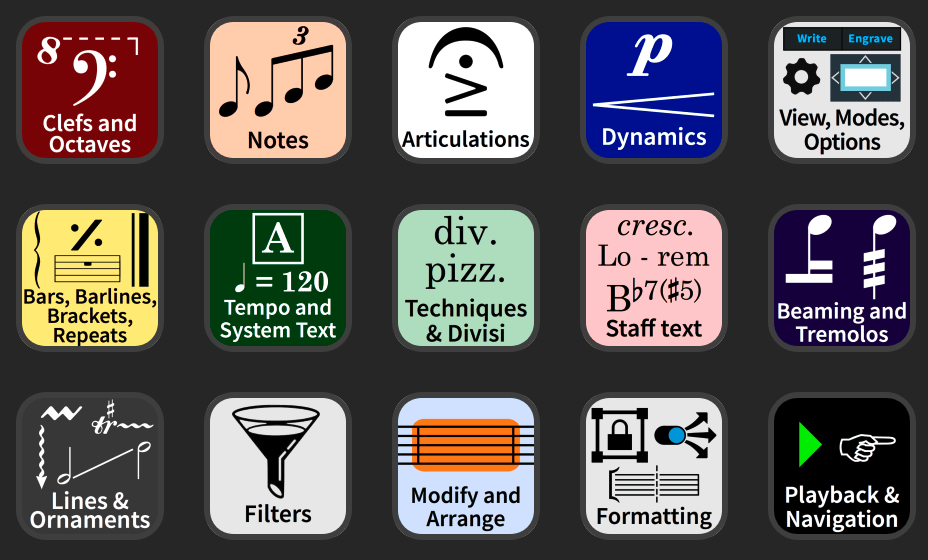 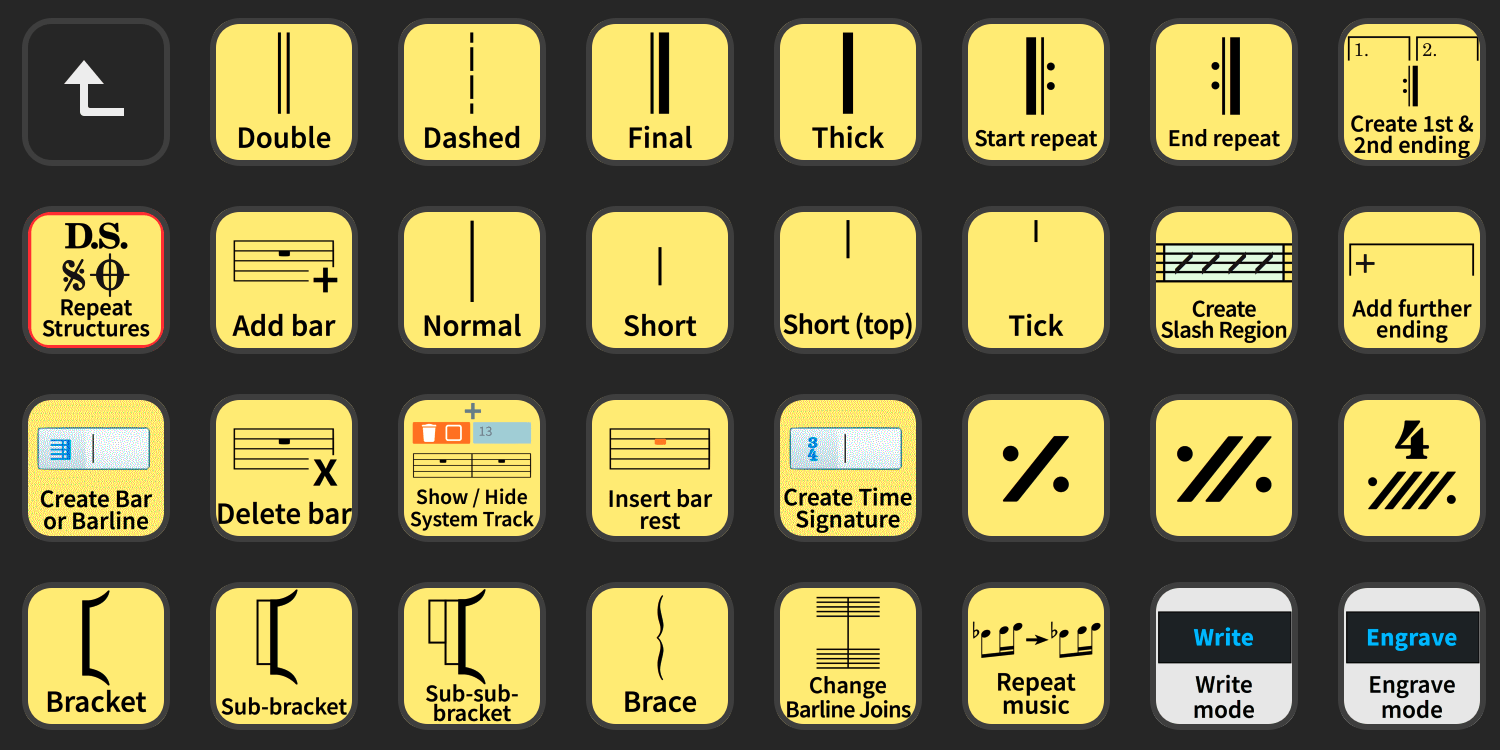 Notation Express XL is the fastest way to work in Dorico Pro. It's a custom-designed profile for the Stream Deck XL console that makes powerful Dorico features easy and fun to use.

(Or edit or create your own button sets)

Or if you have an iPad, Metagrid:

Metagrid Pro, an IOS app, was launched yesterday. The app enables you to control programs from your iPad. Metagrid Pro follows on from Metagrid which was launched back in 2017. The new program adds a lot of functionality including buttons with on/off states that can be grouped, buttons that act like Note On / Note Off keys, faders, the ability to add customised icons and work with your own colour palettes, and a flexible grid that brings space and separation into layouts. Metagrid Pro Tr…

(No affiliation with either)

Cmd-Shift- F, x is my Filter command, where x can be D for dynamics, N for Notes, P for playing techniques.

Yes, though that slightly spoils the consistency of Shift - something to add something to the score. (Though it’s also used to stop slurs and tuplets.)
I use Command F then x, which is a common shortcut for Finding things, and filtering is sort of a bit like that. If Dorico ever gets a Find feature, I’ll have to rethink it!

But it does show that it’s ok to remove a shortcut from another command if you’re not going to use it much, which was the OP’s concern.

Assigning something to Duplicate to Staff Above/Below is essential. I’ve used Shift Alt N and M, again for consistency with other N/M shortcuts; though this does remove the original function to add a Marker. (Other metakey combinations may also be available.)

I’ve added shift D in Setup mode to Duplicate a Player, which I find quite useful. (You’re not going to add a dynamic in Setup mode – the keys can serve dual functions.)

It’s so comfortable to press with 1 hand for me, I dont bother it being one key more. Plus it’s more consistent with the rest of the program.

On windows, typing +key combinations annoys me so I use AutoHotKey to remap them to Win+key. A new set of shortcuts with a single modifier. I set these remaps to be active only when Dorico has focus. I can also hit and with a single finger so there are 2 more sets of shortcuts.