I’m seeing some fairly serious issues with MIDI recording in N’do 7. In short, even simple parts are being recorded with incorrect MIDI start points, and many notes that are short (say around a 16th) are showing up in the key editor as going on for 10 bars and beyond.

If I record straight 8ths played as evenly as is humanly possible for a decent keyboard player, I get the results shown in the screengrab below. When playing there is absolutely no audible issue - everything sounds perfectly in time - so MIDI seems to be reaching Nuendo without issue, but the way it is then recorded is clearly messed up.

I am using a CME controller and recording via USB. I have tried with MIDI timestamp prefs enabled and disabled and have also tried with and without ASIO Latency Compensation enabled. I have also tried different buffer settings on my audio hardware, from 128 sampels up to 512 samples. The results are pretty much the same in every case.

I’d be really grateful for any thoughts or suggestions. MIDI recording with Nuendo 6.5 is always spot on, subject tot the global delays introduced by latency.

Thanks for any help.

My first troubleshooting recommendation would be to try the same thing with another MIDI controller. I had an 88 key CME that became unreliable over time with it’s MIDI output.

It’s the easiest variable to check. Good luck with this.

I have tested with the CME controller’s USB based MIDI interface and via a separate Midiman Midisport MIDI interface. Results are equally bad with both.

Also, when I play the keyboard (live - using it to trigger a VSTi hosted within Nuendo) I hear no hiccups in midi performance whatsoever, but the recorded MIDI within Nuendo is so out of time as to be very easily audibly wrong. Therefore, I can’t help feeling the issue is not with the interface or keyboard.

Check this ; also compare your current settings with your Midi N6.5 settings

Thanks Bernard - as I mentioned in my original post, I have already tried MIDI timestamp turned on and off, makes no difference.

I’m thinking save your User Data Folder (inc Prefs, Key Commands, etc) and then do an uninstall/reinstall on Nuendo. Check that with default prefs, etc before restoring your own.

Also, do you have another MIDI app (not SB), that you can try to see if it’s a system issue.

Step 1 in troubleshooting any mysterious problem is to start Cubendo up with default prefs.

Access that folder by hitting Win+r and pasting %APPData%\Steinberg\ the user data folder is named for the program you 're using, e.g., Cubase 8_64

Or, you can start up in safe-start mode, which disables the Defaults.xml file, but leaves your key commands and other user prefs as-is. This is done by holding ++ while Cubendo is starting up.

As reported on the Cubase forum, I have managed to reproduce the issue consistently with my daily template loaded (around 1500 tracks) and have also confirmed that MIDI timing works correctly in a completely blank template.

From what I can tell, MIDI timing gets gradually worse as the project becomes busier, even if CPU load is modest (my working template generally runs at around 20% average load). Once the project is very busy, recorded MIDI timing is pretty much unusable - in my case I get timing drift of up to a 16th note, plus multiple note-offs not recorded at all, resulting in notes than go on forever.

I’ve tried 2 different USB keyboards and 1 dedicated USB midi interface - results are the same with all. I’ve also trashed prefs etc.; this made no difference.

Steinberg and Nuendo support have not responded to requests for support.

Have you done a midi loopback test to further narrow down the issue?

Please can you elaborate Steve?

Timing discrepancies only occur in recorded MIDI - if I play a VSTi ‘Live’ then I hear no timing problems whatsoever.

Very grateful for any help.

The idea is remove the human from the equation, Transmit midi from an app, MIDI-OX’s MIDI bar, for example, to Cubendo. Then you record and examine the midi data. Human played data is too imprecise to be used for troubleshooting.

I managed to run some tests with MIDI OX / MIDI Bar as you suggested.

First I created a MIDI file with quantized 16th notes each with a fixed length of 1 16th. This is shown below: 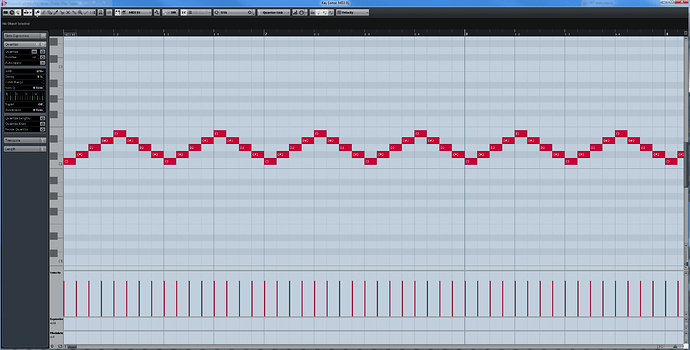 Original MIDI.png2483×1261 98.1 KB
Then I played this same MIDI file back into Nuendo 7 from MIDI Ox’s MIDI Bar, using a completely blank Nuendo project. Nuendo recorded it pretty accurately - if I line the first note up to the beat at the same tempo (NOT QUANTIZING) then you can see the timing is very close to perfect: 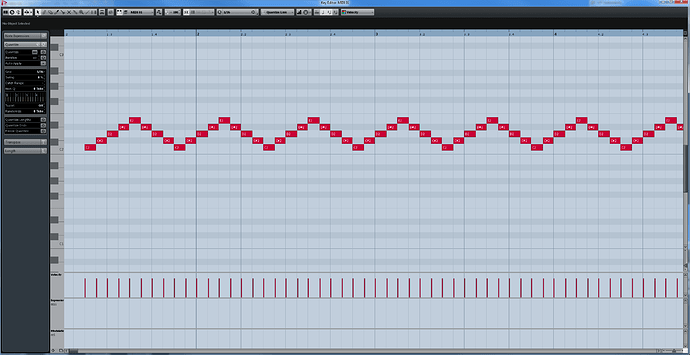 Re-recorded into empty project 1.png2449×1263 99.9 KB
In fact, if I look in the List editor, there are some slight timing drifts in start time and length, but only up to a maximum of around 6 ticks - I can live with that:

… If I then load up my normal working template and again use MIDI Ox to re-replay the same MIDI file and record it in Nuendo, the results are very different. First if I record it at a song position with no other clips whatsoever: 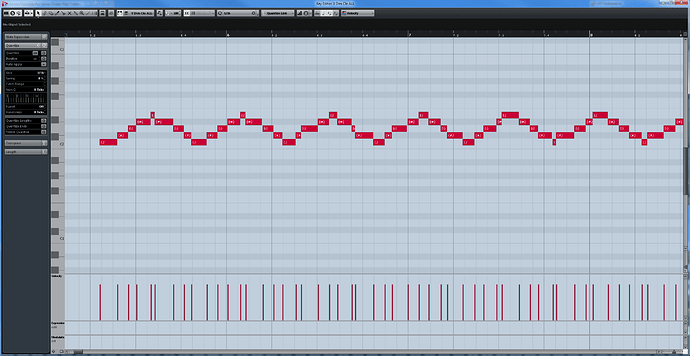 Re-recorded into full template - position 1.png2451×1267 106 KB
And then if I record it inot the same song, but where there is some MIDI activity already going on: 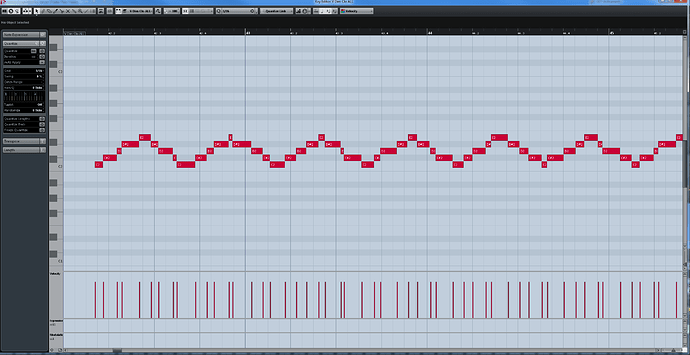 Re-recorded into full template - position 2.png2447×1261 103 KB
Not much difference between the two, but both show very poor timing and note length consistency.

In fact, this is better than if I record something live, because in the test MIDI file there are no overlapping notes. If I play live into Nuendo, even a fairly simple line but with some legato notes or perhaps 2 or 3 note chords, then I get much worse results, because alot of note offs are not recorded at all, meaning I get the stuck notes that I showed in the screengrab attached to the original post.

Not sure where this leave us, but IMHO there is a serious problem with Nuendo’s ability to accurately record MIDI which gets steadily worse, the busier the session becomes.

I originally tried to post the MIDI files but the forum doesn’t allow .mid attachments.

Can I PM them or email them to you, then you’ve got the actual files.

I can take screengrabs of the list editor, but it won’t mean much unless I somehow line up the first note to a grid. Obviously when the MIDI file was played into Nuendo, it was just played ‘freestyle’, and not synced to a click or anything.

Le tme know what you want me to do.

List editor screengrabs for the two files re-recorded into Nuendo with my normal template loaded are attached. I hope this helps. 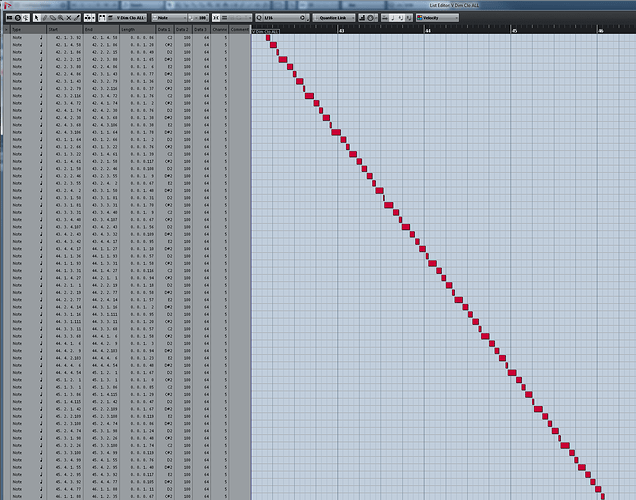 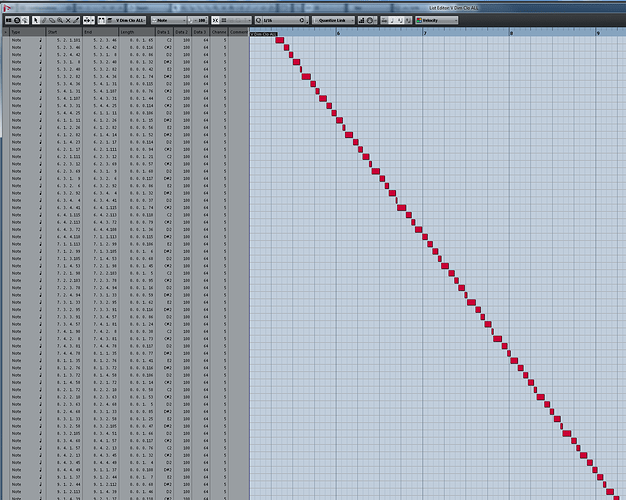 And for the sake of completeness a list editor grab of the original test MIDI file: 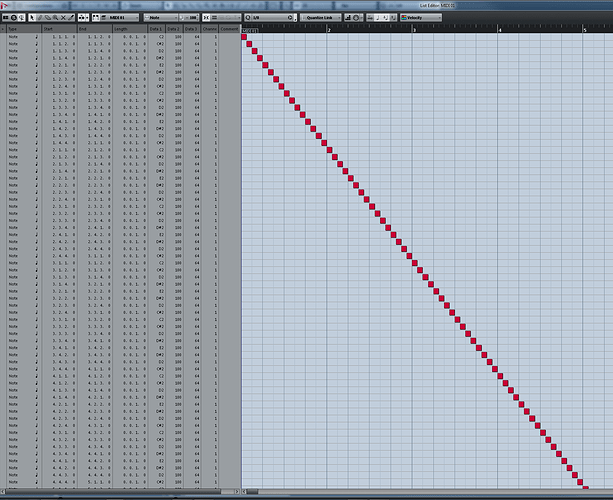 By way of comparison, this is what happens if I use the exact same method to re-record MIDI back into Nuendo 6.5 (see attached file).

MIDI recording, even in the same very large template as tested above, is pretty much perfect, showing MIDI jitter in terms of note position and length of 3 ticks maximum.

To my mind, this demonstrates fairly conclusively that MIDI recording in Nuendo 7 is seriously compromised, to the point of being unusable in larger projects.