Short question:
Anyone out there who can tell me how the sends and reverb fader works in the mixer?

Could you ask a more detailed question that outlines what precisely you want to know?

I’m no audio expert (far from it) but I believe the general principle is that the first send slot goes to the global effects channel, which has the REVerence reverb instantiated by default. It’s not clearly labeled (or indeed labeled at all) but basically the amount of signal sent from that slot determines the mix of inputs that goes into the effects channel. The fader in the effects channel in turn specifies how much of that combined signal then goes to the master output.

Ah, I’m sorry for a very unclear question! This is probably a stupid question but I’m a totally audio/mixer-newbie.

• Well, when opening the send on one channel nothing comes to the reverb channel. How does this work, what are the steps?

• In more general terms, how do I assign one send slot to a certain channel/effect?

As a former sound engineer, actually I must say that what is really unclear is the mixer itself. I did not understand either how to send sound to the reverb, simply because there does not seem to be a routing option for the sends, so we do not choose what it feeds. It might be somewhere in the operating manual, I confess I did not even looked for that (simply because I do not need the mixer by now !)
I am confident that the mixer will evolve with the different updates, when all notations priorities will have been fulfilled

[edit] The operations manual Table of Contents speaks for itself : Play mode is the only mode NOT evoked in the document.

I’ve been looking around to find information about the routing but couldn’t find it and, as you say MarcLarcher, Play mode isn’t mentioned at all in the reference.

Well, well, I guess this will be fixed in due time. For now I hope Daniel and the team will hava a nice couple of days off.

• Well, when opening the send on one channel nothing comes to the reverb channel. How does this work, what are the steps?
• In more general terms, how do I assign one send slot to a certain channel/effect?

Well, as has been mentioned, the mixer is not at it’s full functionality, yet. This will all come with future updates.
So currently you can’t add FX channels and change the routing.

At the moment Send 1 is fixedly routed to the FX channel with the name Reverb. Even though this FX channel is called Reverb, you can replace the Reverb by a different effect. Click on Inserts and you’ll see that the Reverb channel has by default the REVerence reverb as plug-in. You can change this to a different effect if you like or chain with another effect.

So please wait for more functionality in the mixer to come.

Then there must be something I’m doing wrong. As you see on the pic, there are no signal coming to the reverb channel, what am I missing?

Could you send me your project file? Maybe as PM if you don’t want to do it publicly.

There are no secrets going on in this project, I’m just fiddling around to learn the program so I can switch when all the features I need are implemented.
Reverb.dorico.zip (278 KB)

Yes, true, in your project somehow the routing to the Reverb channel got lost. I need to further analyze it as to exactly what and where. More interestingly, what steps did you take to make it break? But I guess you can’t tell anymore as you were just fiddling around.
So there must be somewhere a bug that when you do this or that, then the routing information gets lost. Will be difficult to track this down. But please report if it happens to you again.

In the meantime, it would be better if you start with a new project to play around. Or you choose Play > Apply Default Playback Template, that will also heal the routing.

Ah, I think I found the issue now.
Default Playback Template makes it work again, but only with HSOSE. When using Garritan JABB/GPO the Send-routing seems to get lost. (They both play back fine though)

Ah, true, I’ve just exercised the same with Kontakt, and when I switch back to HALion the routing is lost.
I will file this as a bug here in our database. Thanks for finding.

…and thanks for your quick response!

No matter what I try, I haven’t been able to send the Play instruments through the Dorico reverb.

I set all the Play articulations up myself, as I don’t have the Cubase product. Dorico reverb shows no output although the output channel shows the output and they play fine otherwise.

Here is a diagnostic file/ Violin I is Play, Violin II is SE.

I use ARIA on a regular basis and don’t get any issues with using the single functioning Aux Send on the Dorico Mixer.

There is something that can be confusing at first.

Note that if you are using the multiple output version of the ARIA plugin, that Dorico throws 16 channels on the mixer. Loading fresh sounds in ARIA defaults to sending everything over channels 1 and 2. You must manually assign them to the outputs you desire.

Also be aware that if you use ARIA’s own built in reverbs their output will always go to outputs 1 and 2. If you ever need to isolate the reverb output, then you can simply avoid putting any instruments on that channel and use it as a mixed reverb level directly on the Dorico mixer…

From there you should be able to set up an Aux Send to the one pink Effect Slider on the Dorico Mixer. 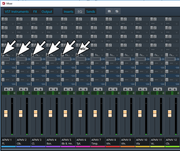 @rexwine: You need to pull up the send levels in the mixer for the Play channels.
Open up the mixer and at the top of the window click on ‘Sends’, then compare to the HALion Sonic channels and do the same for your Play channels.

Sorry, I should have quoted the user to which I was responding. Garritan libraries are mentioned. My tip might not be relevant to the situation, but I know I do forget sometimes, or accidentally assign slots to an unintended fader on the Dorico mixer. It’s worth having in one’s ‘trouble checking’ list when working with multi-output plugins (most of them these days, right?).

Ah, I think I found the issue now.
Default Playback Template makes it work again, but only with HSOSE. When using Garritan JABB/GPO the Send-routing seems to get lost. (They both play back fine though)

@rexwine: You need to pull up the send levels in the mixer for the Play channels.
Open up the mixer and at the top of the window click on ‘Sends’, then compare to the HALion Sonic channels and do the same for your Play channels.

I think I need a picture because I can’t find send levels in Play. I’ve been looking at the Play manual and that isn’t helping either.

Not in Play, but in the Dorico mixer window. Have a look at Brian’s second screenshot and where the arrows are pointing to.