In Cubase 11, when you had multiple tracks selected and were viewing them in the Audio Editor/VariAudio, you would see the current/active track, but it would also overlay the additionally selected tracks with semi-transparency so that you could see what you were doing relative to the other tracks… This was very useful.

Now, in Cubase 12, there is absolutely ZERO semi-transparency. This means, that if I’m trying to align one track to another, but the other track has equal or lower amplitude, I’m working in the dark because it’s completely hidden behind what I’m working on right now.

Please tell me this is a bug that will be fixed. I understand (and very much appreciate) that now there is free warp in the main project window, but I actually got very used to aligning tracks with warp markers in VariAudio and it’s the best way to quickly and precisely do that. In Cubase 12, this is basically impossible. 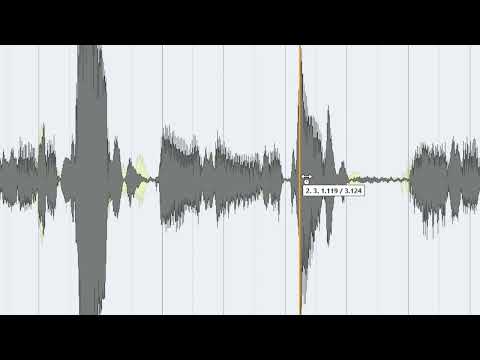 Hi - I see what you mean… Think you’re right about the transparency thing; seem to remember something of this ability in earlier editions, which was very useful. Will have to look through Preferences when I get a chance.

But for now, what happens in C12 if you just go to the Event selector dropdown (toolbar menu of the editor) and swap the focus to the other (yellow) event, to bring it to the front.?

(not at my machine for a while, so can’t try myself)
PS:- thought you were Greg Ondo for a second when you started speaking…!

haha thanks lol… hopefully he see this because he’ll understand exactly what I mean and know that it’s definitely a bad thing now in Cubase 12 which should be fixed.

Anyway, so I could switch to the yellow track, but then I can’t edit the gray track anymore unless I warp all tracks… and even if I could edit the non-priority track, a lot of tracks in reality are more or less then same volume, but which track has more amplitude at any given time goes back and and forth, so I’d have to be constantly switching between tracks just to make simple edits which would be very annoying.

Anyway, so I could switch to the yellow track, but then I can’t edit the gray track anymore

Doh.! Of course; sorry… was thinking/typing aloud - and agreed, workflow failure right there.! God, I hope they can correct this; or is it an (Audio/display) Preference setting that needs adjusting…? Dunno, just fishing here. Can’t look for you myself…

PS:- you could always tune in/submit a question to Greg for his Friday Live Stream to take a look.?

Well I appreciate the thought/effort! Actually, I had to go double check when you said that… because at least that would be a good temporary workaround for SOME of the situations… but I looked and there is no option for “edit clip x”… it’s either “edit active clip” or “edit all clips”. Anyway, I appreciate the effort!

I work in VariAudio all the time so this is vey important to me… I know they added the feature that automatically aligns tracks, but that only really works without errors if the tracks are already very close to eachother… I’m often working with clients that have at least some vocals which are off enough to throw that algorithm off… then I have to go in and check manually to make sure the algorithm didn’t mess up, and at that point, I might as well have warped it all by myself basically… the outcome is always better when I do it by hand and it really helps to have this semi transparency in there for that.

PS:- you could always tune in/submit a question to Greg for his Friday Live Stream to take a look.

Oh good idea… do I just post it in the youtube live chat? Or do I have to submit it somewhere else? And what time does that start?

You can submit beforehand - forget the darn address now, sorry… Or, as you say, post it in the Live Chat (make sure he compares with C11 - he always has a load of previous Cubase installs on his machine).

Hi @OxygenBeats - had a chance to look at this again; its definitely borked in C12.

The blue WAV is ‘in front of’ the orange WAV. Notice the ‘grey-ish’ see-through nature where they overlap as I move the blue WAV. Outlines of orange WAV underneath are clearly seen.

Blue WAV remains a solid colour as I move it over the top of orange WAV.

Ok, this is a very simple example and you could get your edits done I guess, lining stuff up. But for more tricky edits, C11 is way better. Sadly, not been using C12 much since release, so I might have noticed this myself earlier. Have spent more time working in other apps (S1/Melodyne and video stuff in Edius/DaVinci Resolve).

Also, supplementary note:- I no longer see any grid lines in Free Warp mode in the Sample Editor in C12; with C11 you can. I checked that both apps ‘User Colour Schemes’ settings were the same.
(Its odd how @OxygenBeats example video above of C12 behaviour, does clearly show the grid lines; and yes, his editor background is much lighter than mine but I tried changing it on my system to suit, without luck - they do show everywhere else mind. And the exact same user settings are fine in C11 - as soon as the ‘Free Warp’ button is pressed, grid lines appear… go figure…)

I have to say this is broken behaviour - could it be added to your issues list @Louis_R for reference please.?

Here we go, this is the number 49.
Don’t forget to report it on the technical support too. Chances they answer “this is how it has been designed” are quite high though, unless it really is a bug that you can trigger by following specific actions. Here it is like that by default (although no working like the users are expecting / different as previous versions), so, just prepare yourself for the answer

I’ve been there so I know…

PS : There are grid lines, make sure the button is enabled.
On your first image we can see one grid line on the left.
Your color choices can just make it difficult to see.

Also, I just found another bug when stretching the waveform, while checking the transparency issue.

Ok, thanks for your attention @Louis_R - and its good your issues list helps raise some visibility at least.

I will get round to opening a Support Ticket at some point. Understood about their ‘responses’; its annoying since I even think I remember some back and forth about this being a problem in earlier versions… the result being it all finally got resolved, with the transparency ability introduced. If they do come back and try saying this has to be a new ‘Feature Request’, well, it’ll just do my head in…!!

And finally, thanks for the tip re showing Grid lines - that solved that one.!

@Puma0382 I appreciate you diving into it further! Like Louis said, make sure you have that button enabled.

But yeah, I just started officially switching over to Cubase 12. I tried using it when it first came out but there were too many bugs, as per usual… so I thought I’d wait a while for the bugs to get fixed and one of the bugs I had a major problem with seemed to be fixed, so I started using it… but now I’m finding a lot of other bugs. In particular, there seems to be a lot of bugs with the audio editor in general.

I’m just having a hard choice to make right now…Cubase 11 doesn’t have all the bugs and the transparency is VERY VERY useful when doing lots of audio aligning by hand. BUT there are some cool things about Cubase 12… like being able to adjust the grid size in the audio editor and being able to warp in the main project view as well as warp multiple tracks simultaneously…

If this bug persists, or they say “it’s not a bug, deal with it”, then I might just go back to Cubase 11…

@Louis_R thanks for looking into all this with more detail. Yeah, I did reach out to Steinberg via email and I don’t think they understood what I was even talking about… I don’t think the person I talked to really uses the audio editor with multiple tracks often enough to see the difference… I think they told me there was no bug and to post about it on the forum… of course, it’s hard to say if this is really a non-bug or if they just were having a hard time comprehending.

@Puma0382 I appreciate you diving into it further!

No worries.! I just find these particular types of issues really annoying - when perfectly good, working, useful stuff is broken from one release to the next… Yes, it happens; but honestly, it baffles me how other devs/apps seem to cope much better, every time a new release comes around - they all seem to actually move forward on tackling bugs.

Also I’m slightly appalled SB support folk couldn’t quite ‘comprehend’ what you were describing to them; the evidence here is beyond question, surely.? A simple C11 vs C12 comparison and its obvious…

Please raise a(nother.?) support ticket; don’t ease up on them.! Forget the rubbish ‘voting’ system on this forum - you really need to keep stuff visible and in their faces, to get attention.

PS:- if it were me (with plenty of confirmation now) I’d change the thread title in the OP to include [BROKEN BEHAVIOUR] right at the start…

@OxygenBeats @Puma0382 You should always send screenshots and links to the forum as proofs, and also say that several users have already confirmed the issue.

As I said, sometimes the support folks will not see what you describe as an actual issue, and won’t even ask a support colleague or developer for advice, they will simply respond to use the forums for feature requests, just like you said, even if the issue is clearly exposed. I think this isn’t the right way to behave for a support representative but whatever.

Maybe, a little late in reporting to make it for this update - though, the build date is July 20th 2022…

This is a really serious issue, I hope it will be corrected very soon!

@Puma0382 Was this issue ever reported to support? If so, did you get any response yet?

Was this issue ever reported to support? If so, did you get any response yet?