We have received several reports about performance and stability issues in the initial release of Cubase 12.0.0 from different users. In the past weeks, we invested a lot of time in investigating why, on some systems, Cubase 12 leads to suboptimal performances. We want to thank all users that provided traces to us and collaborated with our team to help us find the right spots to look at. We are confident that we made significant headway with Cubase 12.0.10. After the update, a good share of the users who previously experienced performance and start-up issues will be satisfied. However, unfortunately, there are still reports that we cannot reproduce on our systems. Sometimes, the root cause results from a combination of different hardware components, plug-ins, and preferences. In this case, establishing the correct configuration to reproduce an issue is crucial to fixing it.

Please let us know if you are still experiencing performance issues with Cubase 12.0.10. We are taking these reports very seriously, and fixing these issues is currently our highest priority.

Please add some details on your system (OS, CPU), your Cubase configuration (ASIO Guard Settings, buffer size) and some more details on how the performance issue has changed with Cubase 12.0.10.

Hello! After installing the Cubase 12 update, nothing has improved for me… When I started Cubase 12, the PEAK indicator jumps as it did before. No plugins, no project running… After loading any VST plugin and selecting the sound, it is a tragedy. Still Cubase 11 works perfectly in this matter… Expanding the topic a little… The only thing that has been fixed is that during the project playback, when I select any track, the project playback does not stop for a moment. Unfortunately, still during playback when I add a regular MIDI track, the project stops playing for a moment. In C11 this does not occur. I can say that only with large latency settings do the indicators calm down. With the same buffer settings as I have in C11, i.e. 128 samples and input and output latency of 11 ms, Cubase 12 can not be used… In addition, I noticed that during the project playback, when I move any window of the vst plugin, sometimes there are lags in the indicator that indicates where the project is being played. I do not know what it is professionally called … I don’t know if it’s relevant and has any meaning. … With any change in sound in VST plugins, PEAK often jumps to the maximum…

I’ll say it again… Nothing like that is present in the Cubase 11 Pro…
One more thing… Cubase 12 works for me a little more stable on Generic Low Latency ASIO Driver…
Also relatively stable Cubase 12 behaves on ASIO4ALL drivers version 2.15 Beta and the PEAK indicator does not jump so much anymore but there are crackles when I click on any track during the project playback …
Attached is a short video of how the indicators behave when playing a simple project in which there are several instances of the OMNISPHERE plugin. The whole on ASIO4ALL drivers. During playback, I arm the track and disarm. On Yamaha/Steinberg drivers, the PEAK indicator jumps much more… 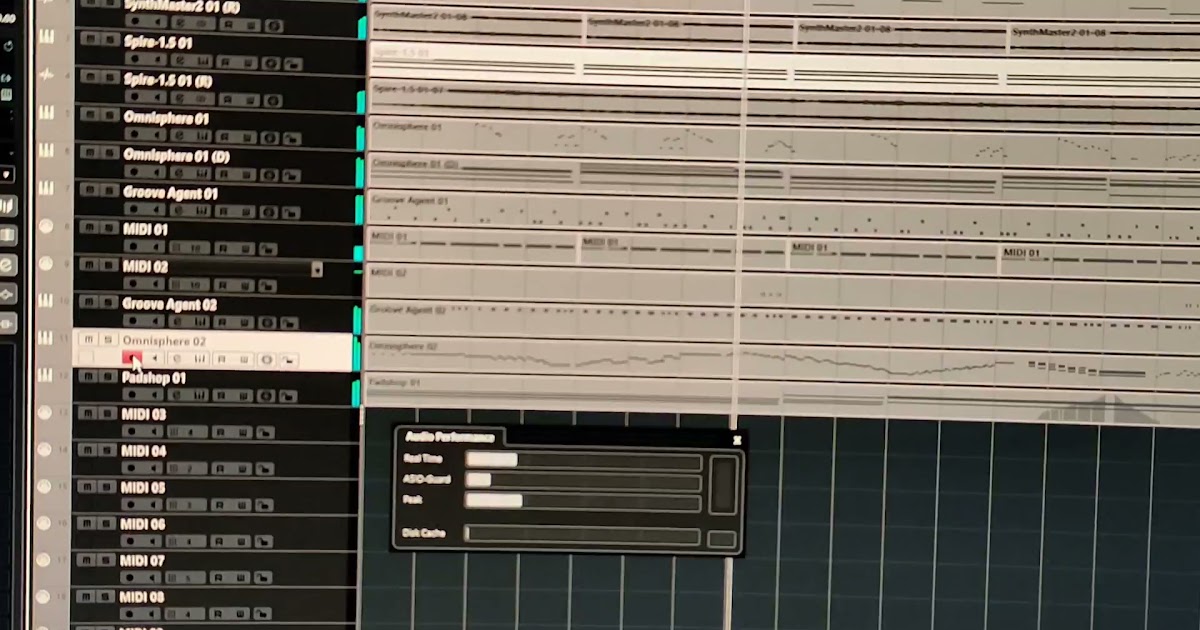 Ssearching for a plugin using the vendor’s name only shows VST2 instances. If no VST2 versions are available, then VST3 versions will appear instead.
I have the list view set to Vendors, and as such, when searching by Vendor’s name, the “folder” names like EQ, Distortion, etc, that contain the VST3 versions, will appear as “expanded” and empty.

Conversely, searching for the plugin using its own name instead of the vendor’s will show both VST3 and VST2 instances.

I’m running Cubase 12.0.10 on a 16-inch MacBook Pro 8-Core i9 running Catalina (yeah I know it’s not officially supported, but it works normally as far as I can tell), and on an 13-inch M1 MacBook Pro running Monterey 12.3.1 under Rosetta 2. The issue is happening on BOTH, therefore, it is unrelated to Catalina.

Hi
After a longer session i have concluded that—

Aturia certain sounds in their 8 Collection runs high on cpu. When rendered ok.
Korg collection and Wavestate are not bad at all
Ik 's plugins ok

I did once on 20 wave tracks had Cubase 12 Flashing on every track and stuttering and wondered what was going on. Like disco lights in a manner of speaking.
Stop the song playing and all was well again after that. Everything seemed to recover and act normal
I do not know what caused that.
Apart from that all seems ok up to now.

Below are screenshots showing an empty project in Cubase 11.0.41 and Cubase 12.0.10. The performance meter in Cubase 12 is noticeably higher with nothing in the session. Same sample rates.

The meter do show different things now so they cannot exactly be compared. The old one shows the average and max but the new ones show real time and peak. I think there is an explanation in one of these threads by support.

Been running 12 since it was available, no issues. Installed the 12.0.10 patch and already in my first mix session the audio stops playing via the outputs, but the meters still move as if there was music playing, and also the track screen freezes. Another odd thing is that the transport bar still works. If I change my ASIO latency (to anything) it may (or may not) start working again.

I can normally run at 64 frames (stable) when tracking, and switch to 1024 for mixes, more if it’s a huge session. I am running at over 1024 on a project that’s not large (standard guitars/keys/drums/bass/vocals type), and can’t get it to stabilize.

Нello from Ukraine. Initially, I apologize for my English.
Cubase 12, apolo twin, intel i5 7600 16gb RAM.
The problem is that when I click on the play, the sound comes in jerks, that is, it sounds for 2 seconds, then disappears for 5 seconds, and so on. At the same time, when the sound disappears, ASIO Guard shows a peak. I already set it to the highest level and it doesn’t matter. Cubase 11 did not have such problems.

@Anton_Plahtiienko
Please add some details on your system (OS, CPU), your Cubase configuration (ASIO Guard Settings, buffer size) and some more details on how the performance issue has changed with Cubase 12.0.10.

I set the buffer in the sound card to max 2048, windows 10.
Cubase itself have to be updated? Or does it need to be done somehow by itself? Maybe I just haven’t updated it

Steinberg download assistans does not offer any updates. Please tell me how to update Cubase myself?

Please open the Download Assistant, select Cubase 12 on the left side and install the Cubase 12.0.10 application from the list on the right side.

It needs an update as well… the Download assistant…
It should do it automatically. But it takes time because it updates some other components as well.

updated
The problem hasn’t gone away.
It is interesting that when I build a project from scratch, there are no such problems, but as soon as I exit the program and go into the project (for example, make edits the next day), these lags begin

This kind of restless peak value in the metering without any load often indicates that there is a high jitter in processing callbacks from the audio interface. Another reason could be high background activity on the system. The smaller the buffer size the more visible it becomes.

If it is hardware related it could help to try different USB ports. Sometimes the port it is internally shared with another device eg. an external drive which could influence the processing callbacks precision.

The difference in the metering to C11 is that it is more sensitive to high frequency changes. The behavior which is visible in the video is probably ‘smoothed’ away in the C11 metering but also visible when doing in-depth analysis.

This change has been done by intention to give a better feedback about the system behavior. As soon as something becomes visible and it is actually reported it enables us to further improve it. If the issue is related to an USB port sharing issue it allows you to select a better port now.

I noticed too a restless peak value in the metering since I upgraded to 12.0.10 when I load a project.
But it sems to be only a dispaly bug in my case beacause I haven’t any lag and the value return to normal as soon as I play/stop the project.

If I unplug my midi controller (Novation Launchkey) there’s no bug at all so I wonder if there’s something to do with te midi remote function.

A post was split to a new topic: Issues with my audiowarp/quantize in Cubase 12